5 Outdoors Destinations in Pennsylvania that You Absolutely Cannot Miss

There is so much to see in the United States than ten lives would not be enough. “Minor” destinations stand a lesser chance to be ever seen. Take Pennsylvania, for example: so rich in history, urban life, and natural attractions. And probably you hardly know any of these.

Here are 5 suggestions to help you plan a lovely discovery tour with a focus on spending as much time as possible outdoors. After whetting your appetite, you can follow this link to find out more on PA online casinos and get even more fun from your trip.

As many as 11 miles of beaches, concert spaces, a lighthouse, lagoons, an environmental center. This is just a small part of what you will find on the shores of the great lake.

In this lovely park, you will feel at complete ease if you like to enjoy nature in peace. Alcohol-free, smoke-free but pet friendly: provided you respect the rules, you can walk your dog on the beach and in the water, on a leash, outside of designated guarded zones. People can be perfectly safe swimming because this is what guarded zones are for.

In the park you can hike, bike, fish, ride a horse, kayak on white waters or paddle in quiet ones with a canoe. Or just relax and picnic. Stay overnight in houses, inns, cottages, rustic cabins, or even a yurt!

Only 28 miles from Philadelphia, you can explore a bit of heaven on earth in the Brandywine Valley. More than 1,077 acres (436 hectares) including gardens, meadows, and woodlands.

Outdoor gardens are a showcase of very diverse landscape designs, ranging from formal to naturalistic. As many as 20indoor gardens are hosted in a 4.5 acre (1.8 hectares) group of heated greenhouses.

The Conservatory contains 4,600 different types of plants and trees and a wealth of fountains. The site is one of the most important horticultural displays gardens in the United States, where visitors can get acquainted with both native and exotic plants. 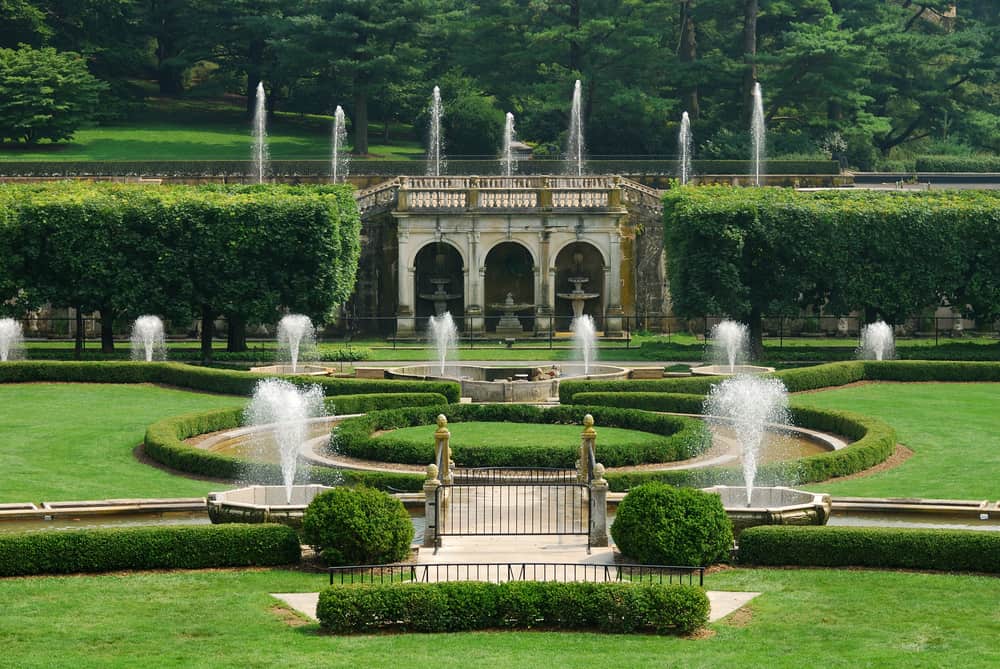 Fountains in the garden with green lawn from Longwood Garden, Pennsylvania.

In 2010 a Dutch landscape architecture and urban planning firm, West 8, was hired to help with an ambitious plan of growth and expansion. Since 2012, the Gardens have attracted more than a million visitors a year.

Point of View Park and Point State Park in Pittsburgh

On the edge of Mount Washington, the Seneca chief Guyasuta and George Washington have been sitting since 2006. Their bronze statues form a composition bearing the title “Point of view”, cast by sculptor James A. West.

The two leaders did really meet in October 1770. Washington was exploring the Ohio banks in search of lands fit for new settlements. The sculpture portrays them with their weapons down, staring into each other’s eyes at a very close distance.

Point State Park is just opposite, at the junction of three rivers. Here you can find the remains of two of the oldest military structures in Pittsburgh. Fort Duquesne, built by the French, and Fort Pitt, built by the British, were strategic at the time of the French and Indian War, between 1754 and 1763.

The lands around The Point, where the Monongahela and Allegheny rivers join to form the Ohio, were a battlefield between the two colonial powers before Pittsburgh was built. The Monoghaela Bastion of Fort Pitt hosts a museum dedicated to the war between Native Americans, French colonists, and British colonists.

The Park is a National Historic Landmark. You can enjoy more scenic views of the city from here and take pictures of the iconic fountain which sprays water up to 150 feet. 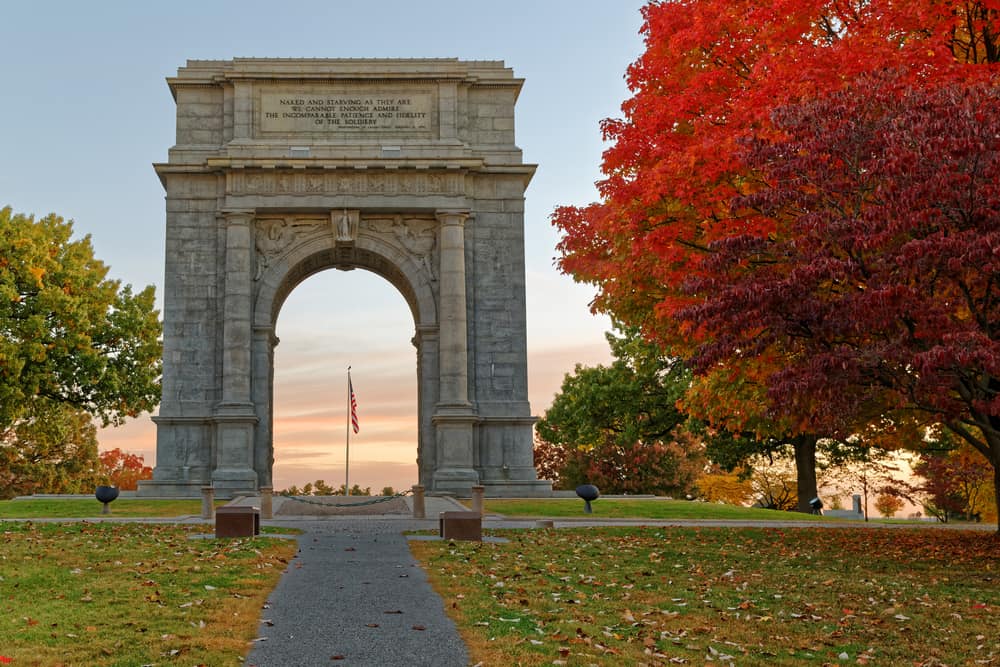 The National Memorial Arch is a monument dedicated to George Washington and the United States Continental Army. This monument is located at Valley Forge National Historical Park in Pennsylvania, USA.

For a full immersion in the story of the Continental Army, follow the trails of this very special park. George Washington had his headquarters here, in a stone house on the Schuylkill River.

In December 1977, Washington led his men into Valley Forge. The soldiers were exhausted and needed a resting place for the winter.

General Peter Muhlenberg’s brigade built hundreds of log huts on the hills overlooking the Schuylkill River and spent the next six months there. Every cabin could host a dozen soldiers. The Muhlenberg Brigade Huts have been reconstructed for your entertainment.

Visitors are attracted mostly to the small two-story stone house picked by Washington as his headquarters. During the whole winter, he lived and worked there, together with his highest-ranking officers.

In the meanwhile, Henry Knox, who had been in charge of the artillery regiment since the Battle of Bunker Hill, was training his artillery unit.  That site today is one of the most attractive of the park. Rows of cannons have been installed there to recreate the atmosphere of the time for the curious visitors.

Don’t forget to visit the United States National Memorial Arch. The 60-feet high monument was dedicated in 1917 and since then overlooks Valley Forge.

Have you ever walked on an endless field of boulders? In this vast and beautiful park, you can. Boulder Field is a 16.5-acre (6.7 ha) geologic phenomenon. Walking across it is a very unusual experience.

After that, turn your steps towards the magnificent Hawk Falls and enjoy the contrast. The park has more than 40 miles of hiking trails.

You can swim in Sand Spring Lake, catch fresh trout, explore the Death Trail with its dams and artificial lakes, play 18 holes of disc golf, hunt, or just observe the wildlife. Rent a rustic camping cottage if a one-day excursion is not enough for you.

Black bears are abundant here: follow the recommended precautions and enjoy their presence!

A Complete Guide to Luxury Trailers

Things You Need To Know Before Visiting Saudi Arabia