Home » Do You Know the Effects of Marijuana on Your Mental Health?
Herbs

Do You Know the Effects of Marijuana on Your Mental Health?

Marijuana is currently the most popular drug around the globe. The World Health Organization (WHO) notes that cannabis has seriously gone mainstream and it’s currently used by over 2.5% of the world’s population (147 million people).

Bringing the discussion closer home, a survey report in the Annals of Internal Medicine shows that 1 in 7 Americans had used weed in 2017.

This increase compared to several years back is partly linked to the increased consideration of pot as generally safe for both recreational and medical use.

But if you are already a user or are considering joining the bandwagon, do you know the side effects of marijuana on your mental health and functioning? Well, there’s more beyond the ‘High’.

Increases the Risk of Depression

Depression is a common mental illness and a serious disorder affecting over 300 million people of all ages worldwide. At moderate and severe intensities, this mental condition greatly alters how individuals perform at work or school and how they relate with others. At worst, depression leads to suicidal thoughts and attempts.

At the moment, reports show that most people use cannabis as self-medication for dealing with anxiety. The usefulness weed in anxiety management is linked to its ability to alter the activity of the brain’s endocannabinoid system and stabilize mood.

The way tetrahydrocannabinol (THC- the key active ingredient in weed) works in the brain is complex, though.

Most studies show that while marijuana can calm an anxious mind, it only does so for the short-term while heightening symptoms of depression later in life.

This highly publicized study by a team of researchers from McGill University, Rutgers University, and Oxford University found that adolescents who use weed are 37% more likely to develop depression in their adulthood and 4 times more likely to attempt suicide compared to their non-user peers. 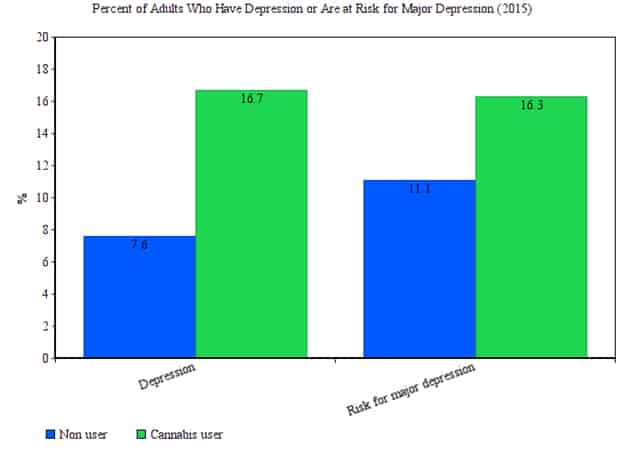 Experts say that it’s quite hard to detangle how cannabis leads to depression. While there seem to be other factors involved, they advise being cautious with its use especially if you are already predisposed to other mental health disorders.

Short-term memory loss is a well-known side effect of using weed. Research shows that memory deterioration is worse especially among heavy and frequent pot users.

While it has been clear that cannabis causes memory deterioration by affecting the hippocampus- the section of the brain responsible for converting short-term memory to long-term memory- what wasn’t clear is how this happens exactly.

But scientists from the University of Bordeaux, France have recently sorted this out. In their study, published in the Journal of Nature, the team found that THC causes memory loss by binding to CB1 receptors in mitochondria.

It could cause long-term memory loss and impaired episodic memory too!

Besides making it impossible to recall things that happened half an hour ago, prolonged use of cannabis causes long-term memory loss too. This is according to a recent study published in the Journal of Hippocampus.

In this longitudinal study, the researchers noted a significant difference in the shape of the hippocampus of individuals with cannabis use disorder compared to the control group.

Explaining these results, the team said that prolonged and chronic use of weed aggravates the loss of neurons in the hippocampus. This not only leads to the change in the shape of the hippocampus, but it also lowers its ability to convert short-term memory into long-term memory.

This could explain why individuals with cannabis use disorder also tend to have problems with Episodic Memory (EM) – this is the ability to recall autobiographical events including time, place, who, and why.

Schizophrenia is a mental disorder that alters the way an individual interprets reality and consequently how he/she acts.

This mental condition isn’t common but it can have devastating effects including suicidal thoughts and behaviors.

Although the exact single cause of this mental disorder is still unknown, experts are beginning to believe that weed could cause it – and it’s not hard to see why.

Among other symptoms, schizophrenia is characterized by impaired cognition, disorganized and confused thinking and speech, and psychotic symptoms such as hearing voices (hallucinations), paranoid delusions, and distorted beliefs, behaviors, and perceptions.

So, what’s the link between this mental disorder and marijuana?

Well, while there isn’t a direct link between the 2, psychosis is common in both. Research shows that marijuana use among people with this disorder leads to severe symptoms sometimes requiring lengthy stays in hospitals.

Also, if you are predisposed to this disorder, for instance, having AKT1 and COMT genes that are known to alter brain chemistry, marijuana use can easily increase your odds of developing this disorder.

May lead to a permanent decrease in IQ

Another surprising finding on the weed and cognitive impairment is its ability to cause a permanent decline in IQ, especially among teenagers and kids.

This is according to what is currently regarded as the best study on this subject and published in the Proceedings of the National Academy of Sciences of the USA. 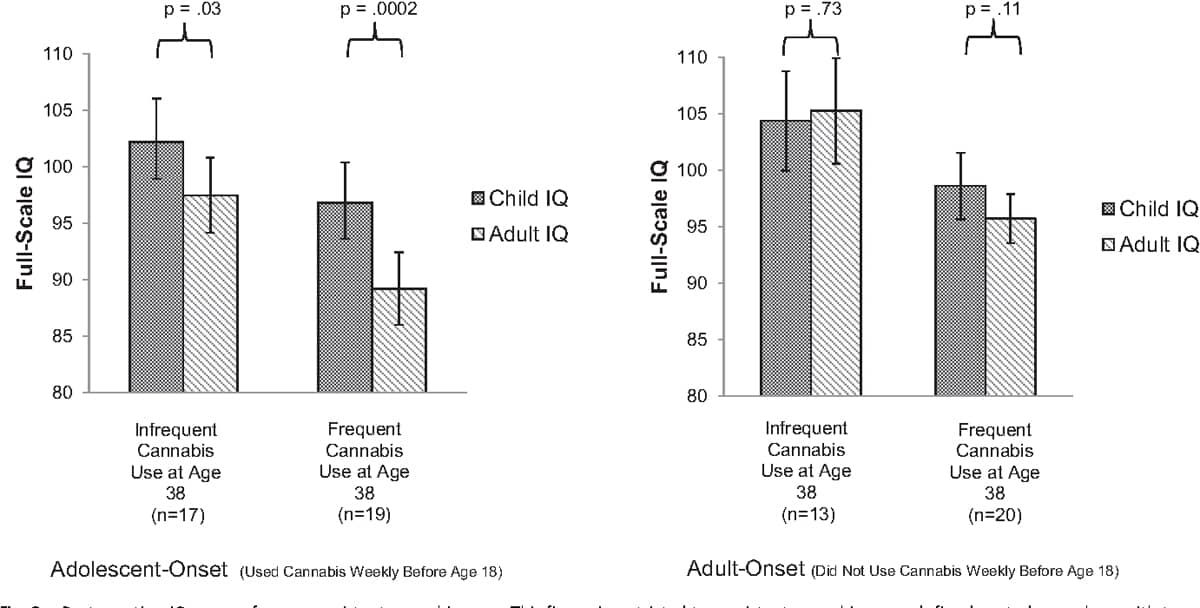 This is a longitudinal study that took over 30 years to complete and used a retrospective approach. In such studies, the researchers look back in time and find the link between a factor and an outcome.

In this study that involved following 1,037 individuals from birth to age 38 years, the researchers noted a significant decline in IQ among weed users compared to non-users. Precisely, the results showed that weed caused a permanent loss of up to 6 points among cannabis-dependent and regular users.

Another similar study seems to back these findings. In fact, this research showed that teenagers lost at least 2 IQ points even if they had used weed only a handful times compared to those who hadn’t used weed at all.

Considering that passive inhalation of weed smoke can lead to detectable amounts of cannabinoids in blood and urine, this is one reason why exposing kids to weed isn’t in their best interest.

Addiction to weed isn’t common compared to other types of drugs. But it is addictive too. As a matter of fact, the National Institute on Drug Abuse says that 4 million Americans were struggling with marijuana use disorder in 2015. This number is expected to increase as more states legalize recreational weed and THC potency in cannabis is increased too.

Besides causing intensive cravings and compulsive use of the drug despite its well-known consequences on one’s life, marijuana addiction also exposes you to other dangers including a heightened risk of cancer and predisposition to severe heart attacks and mental disorders.