San Antonio has become one of America’s favorite travel destinations. It is one of those great, diverse cities with something for everyone. There’s the history of sites like the Alamo, the amazing food, the flamenco music that plays along the River Walk, and even theme parks if you like thrill-seeking adventure. 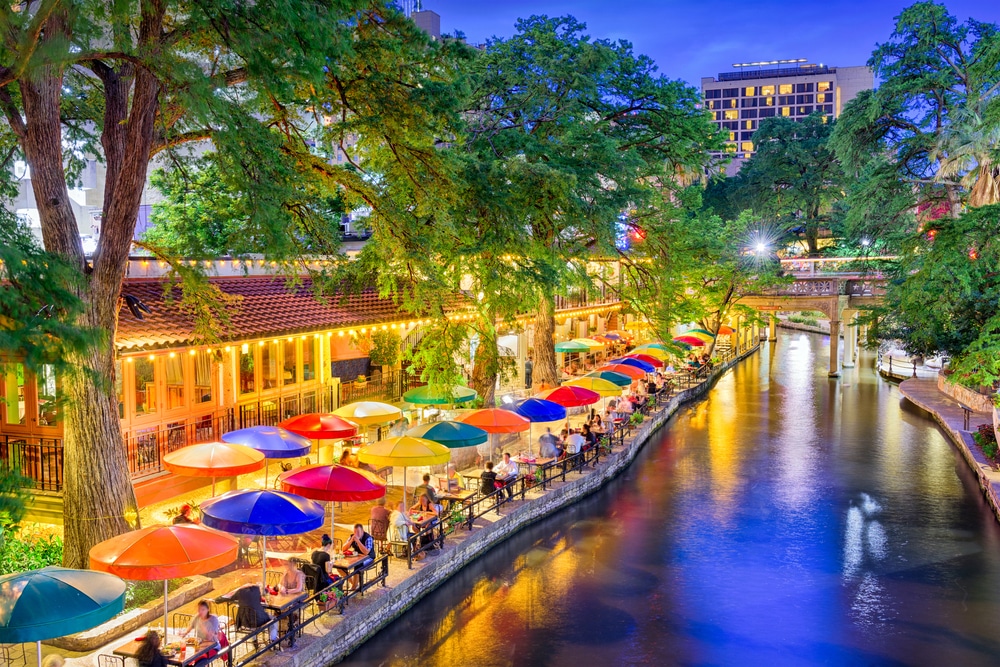 If you’re the process of deciding where to stay in San Antonio, it can be helpful to have an overview of the general neighborhoods and areas in the city.

Some of the more popular neighborhoods and areas of the city for travelers include:

Downtown and the River Walk

If there’s one area of San Antonio that’s probably most popular with tourists to the city, it’s downtown and the River Walk. Downtown is the center of business in the city, but it’s also where you’ll find attractions like HemisFair Park. Downtown San Antonio is also where the Convention Center is located and the Tower of the Americas.

If you go to the western part of downtown, you’ll find Market Square, with Latin American influence, plenty of Tex-Mex eateries and a lot of shops selling traditional handmade artisan items like silver jewelry and leather items.

The River Walk serves as a divider for downtown, and even though you would technically describe the River Walk as part of downtown, it stands apart as its own distinct area as well.

The River Walk features the stone bridges that cross over the San Antonio River, and an abundance of restaurants and bars. This is also where you’ll find some of the city’s more high-end lodging options.

If you’re a history lover, you might opt to stay in or at least visit Alamo Heights. Alamo Heights isn’t a neighborhood. Rather, it’s an incorporated city surrounded by San Antonio. It’s around five miles north of downtown, and it’s one of the oldest areas of the city.

Alamo Heights has tree-lined streets and historic cottages. Along Broadway, there are more high-end shops and eateries. This is where the Broadway Cultural Corridor is found, and also the McNay Art Museum.

Other places to visit in Alamo Heights include the Judson Nature Trails and the Alamo Quarry Market.

Alamo Heights may be an incorporated city but staying in this area still provides you convenient proximity to downtown and the River Walk.

The Pearl area is also part of the Broadway Cultural Corridor. One feature Pearl is best known for is the City Brewery, which was at one time the largest brewery in Texas. It was also the only San Antonio brewery to make it through Prohibition.

Breckenridge Park spans 300 acres, and there’s plenty to do in the area. It’s especially family-friendly because it’s home to the San Antonio Zoo. There’s also the Witte Museum, the DoSeum which is an interactive children’s museum, and the serene Japanese Tea Garden.

The Northwest area of San Antonio is home to the South Texas Medical Center. There isn’t a lot of historic charm in this area, but there are some trendy retail options. There’s also the La Cantera Resort & Spa and the Shops at La Cantera.

A little south to the Northwest area of the city is SeaWorld San Antonio. Northwest is also home to Six Flags Fiesta Texas.

Southtown is around two square miles that’s close to the tourist hotspots of the city, but it feels separate and distinctive. Southtown is historic in many areas, with beautiful, well-preserved architecture. It’s often described as an arts community, and it’s home to the Blue Star Contemporary Art Museum, which is part of the Blue Star Arts Complex.

The Blue Star Arts Complex is a set of transformed warehouses that have been made into galleries, specialty boutiques, and studios. There are regularly rotating exhibits of artists from Texas and the world. It’s also home to the First Friday art walk held every month.

This area is also close to the King William Historic District, which is arguably one of the most beautiful neighborhoods in Texas. There are many 19th century mansions, and many homes have been beautifully restored. Of these mansions, one of the most notable is Villa Finale, once owned by Walter Mathis. You can now tour the home and see his art collection.

Throughout Southtown, there are San Antonio B-Cycle kiosks so you can rent one and explore the area that way.