It sounds like I'm quoting a cellphone commercial, but Li's actually a filmmaker. He recently spent a month in the vast grasslands of Mongolia.
Viral Rang
Videos

It sounds like I’m quoting a cellphone commercial, but Li’s actually a filmmaker. He recently spent a month in the vast grasslands of Mongolia.

In his visually stunning short film “Nomads of Mongolia,” he shows us what life, work, and play look like for the Kazakh shepherds who’ve roamed those lands for centuries — and how it’s changing.

Believe it or not, “most of the nomads have cellphones,” Li says.

The Diplomat wrote that it’s the only way for parents to keep tabs on their children who live in cities. But the cellphone isn’t the only sign of modernity entering nomadic life. 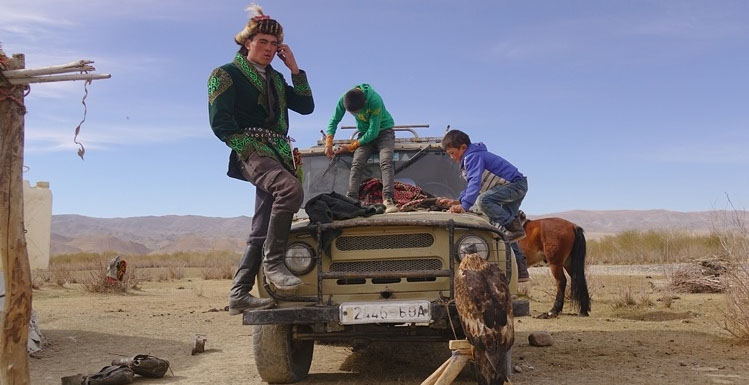 Ansley Sawyer, a producer on the film, added, “Instead of shepherding on horseback, it’s sometimes easier to herd by motorcycle.” She also noted that while the nomads once relied on livestock-drawn carriages to move their camps, today they use Jeeps and trucks.

“I’ll never forget watching an eagle hunter climb on top of his Russian Jeep to get better reception and to update his Facebook,” said Sawyer. “You can get the internet literally anywhere these days.”

But the ways of the old world are still alive (not the least badass of which is the aforementioned eagle hunting).

“[One] thing that surprised me was the day-to-day experience of having a pet eagle,” said Li. “To the nomads, it’s just a part of the household — like a massive, deadly parakeet. Once the winter arrives, it gets to stretch its wings and hunt.”

(You should definitely watch the video at the bottom to see one in action.)
As the modern world shapes their way of life, one thing never changes for these nomads: their love of family.

“Everyone’s focus is to strengthen and support the family,” said Sawyer. And amid the desolation of the Mongolian steppe, that focus is as sharp as their eagles’ sight.

From family values to a reliance on the natural world, we can find reflections of ourselves even in the middle of nowhere.

Even younger family members who leave for cities like Ulaanbaatar for education and work keep strong connections to home.

“I think the urbanized people of Mongolia still have pretty strong ties to their nomadic history,” Li told me. “Some of them told me they couldn’t sleep in the city — too many noises at night. For many of them, the move to the city isn’t necessarily a permanent one.”

Still, the world isn’t always changing for the better.

In addition to family, the only other thing the nomads can count on is nature. “The Kazakh people are totally dependent on their environment,” Sawyer said. “They move the herd through the summer and settle down for the winter after harvesting a percentage of their flock.”

Climate change is making it more difficult for the nomads to maintain their way of life.

“Mongolia is becoming drier and drier, which is making it more difficult for the nomads to find land for their animals to graze,” Li explained. “This is forcing some of them to give up their lifestyle and move to cities.”

Sawyer also noted that many families in the treeless region use coal to heat their homes. But the rising cost of coal has created yet another tension that divides families as young people take to cities to earn money to support their families.

Most of us will never be able to fully relate to the nomads’ pastoral way of life, but Li’s film shows we may actually have a lot in common.

From family values to a reliance on the natural world, we can find reflections of ourselves even in the middle of nowhere.
Watch “Nomads of Mongolia,” a short film by Brandon Li:

5 Sitcoms You Can Enjoy Free On Peacock Tv In 2021

7 Sights Where Harry Potter was Filmed

Seven Ways Streaming Has Changed Television Around The Globe

How To Make The Most Out Of Your Hulu Subscription