Home » With Your Soul: How to Perform Gospel Music that Moves
Life

With Your Soul: How to Perform Gospel Music that Moves

Gospel music is a genre which popularized primarily in America and spread worldwide. The music itself is characterized by dominant vocals with strong harmony. The very definition of ‘gospel’ means good news. Gospel music is one of the most important ways into which Christianity spreads its morals and ideals across audiences worldwide. In general there are two types of gospel music that have developed amongst different races in the United States, that is urban or black gospel and southern or modern gospel music from the white counterpart.

The common theme in gospel music is to give thanks to what you have and praise God or Christ. It is often performed during religious worship services and sometimes during ceremonies that have religious themes such as weddings and funerals. The general instruments that piece together gospel music include a lead singer, a choir, a piano, and an electronic organ. Gospel music is heavily influenced by jazz and blues genres. The following article will explain some of the techniques for performing gospel music focusing on the piano.

Gospel Music on a Piano

The main purpose of gospel music is to elevate your audience’s consciousness to a divine higher state with a heavy emphasis on reaching spiritual awareness. As a piano player or any other performer for that matter, your sole responsibility is to be adequately prepared to raise your audience’s spiritual consciousness. Playing gospel music on a piano means that during the solemn hymns you must encourage the choir to sing lively and this depends on your mood and playing style. If you want the choir to sing lively you must have a more upbeat playing rhythm and if the opposite you must use a more solemn mood with a slower rhythm.

The major techniques for playing gospel songs on a piano requires the practice of the chords, scales, legatos, arpeggios, and staccatos. Scales are a range of 8 notes. They begin on a note and end on the same note but on octave higher (upper note). A commonly used technique in gospel music is called the 13th chord technique. It is made of 7 notes which are commonly used in the jazz genre. It is built on the 5th scale note. You must play the dominant chord when playing on a 5 to 1 progression. The basic chords for gospel music should be memorized. In the beginning the major chords of C, D, E, F, G, A, B, and C.

The C major chord will consist of C, E, and G. Arpeggios is when you play chords of every note separately. Staccato requires playing notes quickly but still you play each note separate from each other. Legato on the other hand requires playing without lifting your fingers from the keys. All of these techniques require excessive practice to be properly mastered in order to lift your audience’s spirit.

The Importance of the Singer and their Technique

Many gospel singers have a blues style to them and are able to display their emotions about each song they are singing, which is key to narrate a story convincingly to the audience. Great gospel singers are masters of applying voice dynamics otherwise known as placement of their voice. They do this by inhaling deeply and singing pitches at half their range. They sustain this pitch by starting to sing softly then slowly increasing the volume of their sound and finally slowly making it soft again.

The facial and body expression are another thing that many great singers master by watching others and truly understanding the meaning that the words of the gospel song are trying to convey. Some great exercises for singing gospel include controlling breathing by performing the Fontanelli exercise. This is done through good posture, breathing slowly through the mouth, and counting up to 4 silently. After one must exhale air slowly to the count of 4 again. Doing this you should be able to exhale all the air inhaled initially. 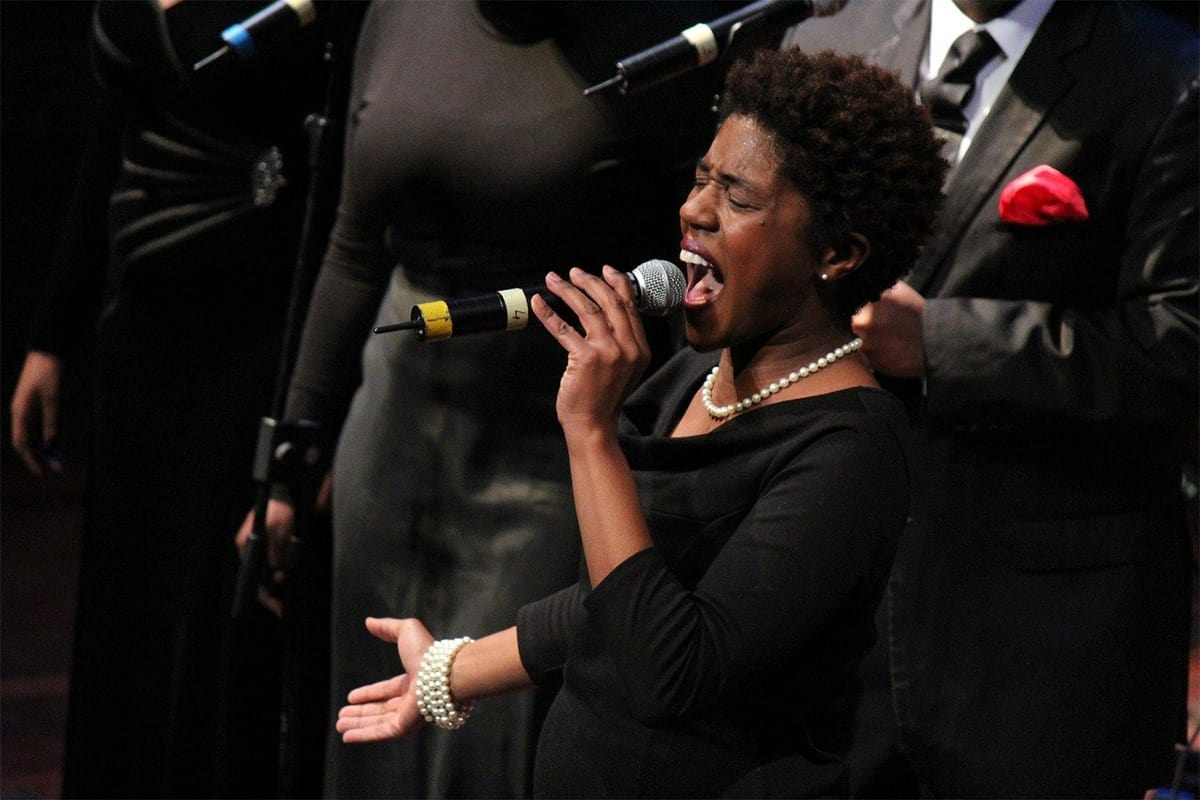 The next step to the exercise is to ensure the proper expansion of your midsection, hence you should be in front of a mirror during the exercise. Once you become good at this exercise you slowly start to change it up by performing it to higher counts of 5, 6, 7, and 8. Facial expression is very important in conveying emotion to your audience, therefore, a lot of practice needs to go into having the proper facial expression for the song that you are singing.

Although mastering gospel music sounds difficult at first because there are some traditional rules that should be followed, the key to success is always to practice as much as you can and even hire a gospel music teacher to observe and judge you during your practices. Having said that traditional gospel music has evolved to a more contemporary or modern style gospel and this certainly makes it much easier for a beginner to master because the rules are more relaxed and aligned with popular urban music singing such as jazz, blues, and even hip-hop.

Can You Ride A Dirt Bike Anywhere?

How To Move Away for College: 5 Tricks You Need

What Defines a Good Pilates Instructor?

Answering the Call of the 21st Century: 5 Reasons Seniors Should Own a Cell Phone